The following steps will show you how to use the black window all hackers use. It might look a bit scary at first but really it's just a prompt waiting for commands from you.

What is the command line? The window, which is usually called the command line or command-line interface, is a text-based application for viewing, handling, and manipulating files on your computer. It’s much like Windows Explorer or Finder (Mac), but without the graphical interface. Other names for the command line are: cmd, CLI, prompt, console or terminal.

How can I open it?

If you don't know what to do, you can try Google, ask the coach, or you can e-mail us.

When you open the command line, you should see a white or black window that is waiting for your command. Each command will be prepended by the sign $ or > (depending on your operating system) and one space, but you don’t have to type this prompt. Your computer will do it for you.

If your font is too small you can click on the small window icon in the up right corner. Then choose Properties and find the Font tab where you can set a different font size. 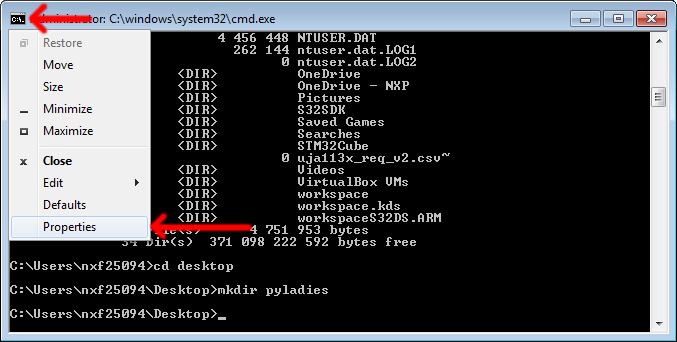 We will start with a very easy command. Write whoami (who am I?) and press Enter. Your user ID will be shown. For example on Alex' computer, it looks like this:

The current directory is often also displayed before $ or >, but it's good to know this command in case that you get lost or if you have to work on a computer that is set to display something different before $.

So what's in that directory?

Command ls or dir (list or directory) will show us what's in the current directory: all files and subfolders.

You can chnage your current directory by using the command cd (change directory) - for all OSs (in Windows, if you don't specify anything after cd, command prints the current directory as we said earlier) So after cd we have to write the folder's name where we want to go. Don't forget to check if you were successful.

If you have Linux or macOS, be careful - those systems are case sensitive, so Desktop and desktop are two different folders!

If you change directories to a different disk (to D: from C:) you have to enter the disk's name (D:) as a special command before you enter cd.

How about creating a practice directory on your Desktop? You can do this by using the command mkdir (make directory). After that command, write the name of the folder that you want to create - in our case practice.

Now, look on your Desktop or into some other graphical program for browsing folders, and check if the folder was created!

In your new practice directory, try to create a subfolder test and check if it was created.

The commands cd, mkdir and ls or dir might help you.

We don't want to leave a mess, so let's remove everything we did until that point.

Now it's time to delete the practice directory. For that purpose, use rm or rmdir (remove or remove directory).

The command line does not have a Recycle Bin! Everything will be deleted for good. Every time, make sure that you are deleting the right folder.

In Unix, you have to write rmdir -rv (minus,r, v). The parameter deletes everything (r - recursive) inside the folder, and it prints info telling you (v - verbose) what the command is doing.

In Windows, you also have to add a switch to the rm command to delete everything inside a directory. Here, the switch is /S (forward slash, S).

There is a table of basic commands:

There are of course a lot more commands. All the programs that you have installed on your laptop can be run from the command line - usually by typing their names. Try for example - firefox, notepad, safari, or gedit. If it's not working, ask your coach and they might help you to find an example command that works.

We will use commands/programs like python and git a lot. We will install them in a while.

Now you can try one more command - the one that closes the command line window - exit. It works the same in all operating systems.

We will be using $ to indicate Linux/macOS (in fact, for Unix based OS) commands and > to indicate Windows commands for the rest of our course. This is the convention in most materials and tutorials you will find.