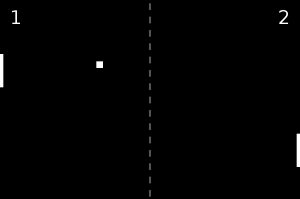 Now we will deepen the knowledge of programming graphics applications which we got in the last lecture about Pyglet, by creating real program.

We will program one of the first video game ever, Pong. Pong was released by Atari as their first game of year 1972 and it started the gaming industry revolution.

You can have a look on video, which shows how Pong is played.

Constants and state of the game

The Pong game has simple rules. But we have to know how to express them in Python, and it is not that easy. Let's take a look at what have to be in the game.

We can express the state of the game in Python using variables and constants. Which makes sense because some things change in the game (bats position, ball position, ball speed, score) and some do not (size of the playing area, size of the bats and ball, position and size of score counters). From the complex data structures we will use list (which we already know) and set, which is similar to set in maths. It's similar to list but it doesn't care about the order and there can't be any two or more same elements.

You might be wondering in what units we can measure distance and speed in such game on a computer. On the screen, it is not practical to measure the distance in centimeters. However, each screen is composed from individual luminous points, ie. pixels. In a graphical application such as Pong, we can measure the distance of two places on the screen as the number of pixels between these two places. Coordinate system of Pyglet is based on pixels, where the pixel with the [0, 0] coordinates is on the bottom left of the screen. The speed can be measured in in pixels per second.

Create a new file. Together we will define constants, which we will need during the game creation. Usually, we would define the constants when we need them, but for simplicity let's do it together and all at once. We'll show you how to start translating the real world problem into Python.

We will now define variables that we will need: ball coordinates, bat coordinates, pressed keys and score of two players. Those variables will be global which would made any programmer furious but it will ease our work for now.

Rendering the game board

First, we open the window with the same size as the game board.

Before we start to make an interactive part of the game responding to inputs from the user we have to be able to draw everything that should be on the game board. Just like in the Pyglet lesson where we had function draw() which rendered the python we will have similar function in the Pong which will render all elements on the board.

Most of the shapes are rectangles so let's create a function draw_rectangle which will get 4 coordinates and which will draw rectangle with the help of module gl by drawing two triangles.

We can now start to work on render() function. First create it empty and register it with on_draw event. That means that it will be called everytime when Pyglet redraws the window. If, for example, the position of the ball has changed the function will draw it a bit elsewhere. By this we are creating the game dynamics. We also did it with the python, but now we have more graphical elements.

For now we only have cleaning of the window and setting the drawing colour to white in the body of our function.

Try to add to the render() function rendering of the ball in the right position which you will get from the relevant global variable. Size of the ball is in our case just small square which size is stored in one of the constants.

After that try to draw both bats. We have the vertical position of one bat stored in the bat_position variable. Horizontal position is a constant. What coordinates do you have to pass to draw_rectangle so the bat is rendered correctly and on the right position? It is similar to drawing the ball.

The midfield line(also the net) will help the game clarity. But how to draw it? We don't have to think about anything difficult. We will just draw it as a series of rectangles from top to bottom. This just needs to generate a list of coordinates, which will have enough distance, and render a rectangle on each coordinate. Which Python function would you use to obtain this list?

So what's missing? Score counter for both players. For that we will have to learn how to draw text with Pyglet. There is already text module which contains Label object. And that's exactly what we need for drawing the score. First we have to create Label object. We will do that by brackets after the name of the object, similar to when we are calling a function: write = Label(). Usually we would create this object once and then we would just change its text and redraw it but we will do it this way cause it's easier. Finally we have to call draw() method or the text won't be rendered.

Now try to use this function in render() function for rendering the score. Use constants WIDTH, HEIGHT, TEXT_ALIGN and TEXT_SIZE for setting the score coordinates.

Yay, now we have the whole game board rendered. Let's put it in motion!

Now it will start to be interesting. Let's move with bats first, because it's easier, and then with the ball.

We need to move with the bats regarding to user input. As long as they will hold for example key S, left bat will be moving down. In previous lesson we learned how to work with event on_text, but this one won't be enough. We will need 2 types of events which we don't know yet - on_key_press and on_key_release.

Pyglet calls a function registered to event on_key_press the same way it calls function render() registered to event on_draw. We will add pressed key to the global variable keys_pressed as tuple with direction and bat's number, e. g. ('up',0), which means that left bat have to go up. We will remove the tuple from the keys_pressed set when on_key_release happens. This will ensure that the set keys_pressed includes all the keys the user holds and we will be able to move the bats according to that.

Will you try to code key_press(symbol, modifiers) and key_release(symbol, modifiers) functions by yourself? You can add element to any set by method add(element) and delete by discard(element). Both take an element which we want to add or discard as an argument, in our case it will be the tuple.

You will have to find out which key was pressed. Pyglet will pass the code of pressed key to our function as first argument so in our case it will be a symbol. It will be a number unless you import key from puglet.window, which contains constants of each key. So you will be able to compare if the key is for example up arrow ↑ as symbol == key.UP.

Why are we using dicard() method and not remove()(which we already know from lists and sets also have it)? Because it won't raise an error when the element is not in the set. So the program won't cause an error when user press some of the defined key elsewhere and then switch back to our window and just after that they will release the key.

Register both functions to events:

Once we were able to process input from the user, we can move with bats regarding that. We will move the objects in the function revive(dt), which will be registered to the clock. Argument dt is time that passed from the last call.

Let's have a look at this piece of code. We are going through both bats in a loop and we ask if there is the tuple of direction and number of bat in the set keys_pressed. If yes we move with the bat regarding to the direction(we add to or deduct from the vertical position of the bat the change which is time from the last call multiplied by bat speed which we have in constants).

In the second part we have to make sure that bat doesn't appear outside of the game board. We know from the last lesson when we were playing with the python image that it can happen very easily. We are drawing bat from the middle, which means that if the bat y coordinate is lower than BAT_LENGTH / 2 it is going outside of the board. In that case we will fix the position to the lowest possible coordinate. It is done also for the top edge accordingly.

Register created function to the clock:

and look at the result.

Before we start to bounce the ball from the walls we have put it into motion first. We shoot it from the centre of the board to the random direction. This should also happen when one player scores and game is starting again. That's why we encapsulate this into reset() function. Call it before you run the app.

How will this function look like? First you have to move the ball to the centre of the board by setting ball_coordinates variable. Then we have to randomly select if the ball should go to the left or to the right by calling random.randint(0, 1). We have to move the ball in the horizontal direction by adding required speed to the ball_speed[0]. The speed in vertical ball_speed[1] direction will be random.

Nothing is happening right now because function revive(dt) is not working with the time yet. We have to set there ball_coordinates. It will be based on current coordinates and time from the last call regarding to physics equation d = v t, which means that the final distance equals to speed multiplied by time. So add the following to the revive(dt) function:

Now let's have a look at what happens when you run the game. The ball should fly into different direction each time.

The ball is flying uncontrollably out of the field now. So we have to make sure that it will bounce back from the walls. Because in our case angle of incidence equals angle of deflection we will just switch the signs of y part of the speed. So we have to add some checks of the ball position and eventually change its direction if it is too low or too high to the revive(dt) function.

Now we have to code the bounce from the bat, or a game reset if the ball is not hit by one of the player's bat(that means that the other one gets a point). We will be adding something to our revive(dt) function again.

First step is to set bounds on y axis where the ball can be to be successfully hit with a bat - between upper and lower edge of a bat:

Now when the ball hits the left or the right wall we can ask if the bat it on the right spot so we can bounce ball back or if it isn't so one player lost and the other one gets point and we can reset the game.

Hooray, we finished the Pong! Now you have fully functioning interactive graphical game based on real game :)